Rolls-Royce Car Company was founded in the year 1904 by two gentlemen named Mr. Charles Rolls and Mr. Henry Royce. The Rolls-Royce model 'Silver Ghost' of 1907 was the beginning for Rolls-Royce to be known as the 'best car in the world'.

Video: Rolls-Royce, car of the Maharajas 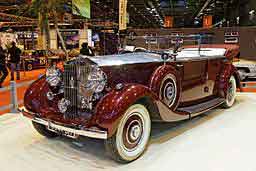 It seems that in 1920, The Maharaja Alwar visited one of the Rolls Royce Showrooms in London and was thrown out by a sales person in the showroom, because the Maharaja did not look like a wealthy person. To vent his anger against Rolls-Royce, he bought a few Rolls-Royce cars and used them as garbage collection trucks in his Kingdoms in India. This story hit world headlines and made Rolls-Royce brand to be ridiculed. So the story goes on to say that Rolls Royce took back the Rolls Royce garbage collection vehicles and replaced them with brand new Rolls-Royces. For More on the truth behind the use of Rolls Royce cars as garbage trucks in India

How BMW got Rolls Royce Cars

What was sold to Volkswagen was the Rolls Royce factory in England plus the right to use the shape of the Rolls Royce front grille and the Rolls-Royce "Spirit of Ecstasy", the flying lady statue which adorns the top of the front grill of all RollsRoyce cars. But the deal with Volkswagen did not include the 'Rolls-Royce' brand name and the RollsRoyce 'RR' Trade mark, since these were still owned by the original Rolls-Royce Company making jet engines, which had split off Rolls Royce Motors out of the group.

Finally a deal was struck between Volkswagen and BMW, where it was agreed that Volkswagen would give up production of Rolls-Royce cars at the end of 2002 and continue to produce only Bentley cars in the original Rolls-Royce factory in Crewe which was renamed Bentley Motors Limited. BMW built a completely new factory for Rolls Royce Motors in Goodwood, England and from 2003 Rolls Royce cars are produced there.

NOTE: As an Amazon Associate I earn from qualifying purchases